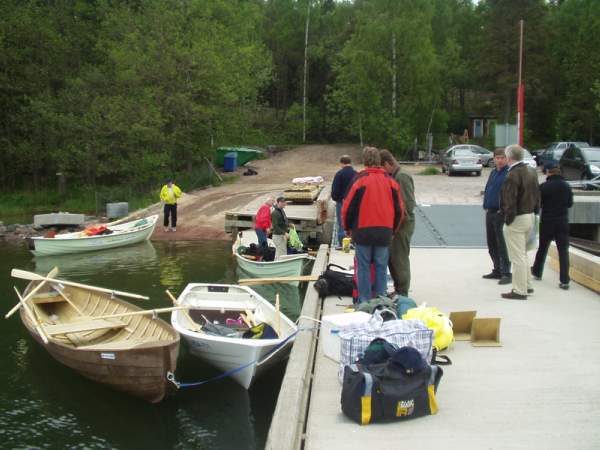 On the evening of June 9 we dragged our boats to Porkkala beach. 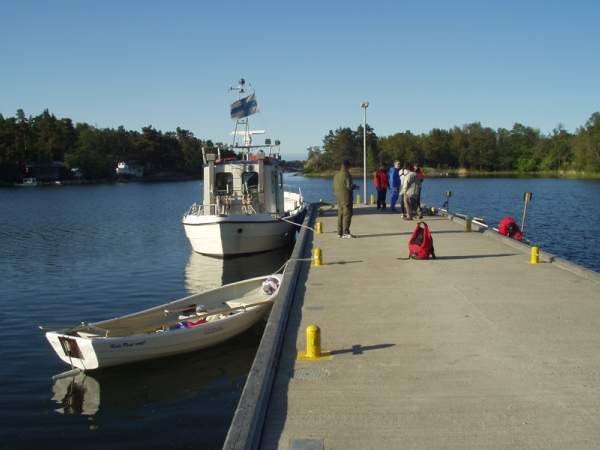 The first test-rows were made. The escort vessel can be seen in the back. 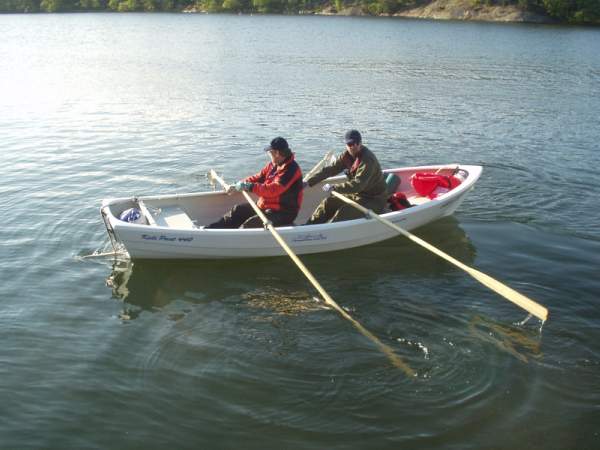 Exiting the Porkkala coast islands we were rowing at a reasonable pace, as everybody was finding their rhythm, matching clothing and switching spots. As we reached open sea our speed increased and the water was smooth, which brought out the competitive spirit in most of the teams. On smooth waters our speed was 3.5 knots. Although we had agreed to stay within a couple miles’ radius from the escort vessel, this was forgotten. 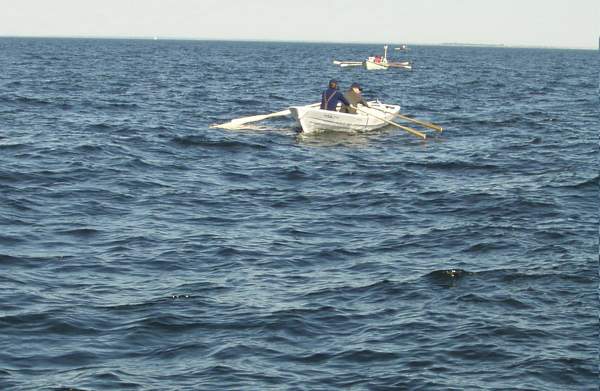 After organising the balance and our gear, we rowed onwards three miles to a cliff island where we set up tents. After a quiet evening by the fire, we went to bed.
On the morning of June 10 we woke at 5. At 7 we were at Porkkala harbour and underwent border guard procedures. We agreed upon a route and time with the escort ship and went on our way.
Four rowing crews participated in Il SUOMENLAHDEN SOUTU 2006. Kiili boat 440 with two rowers; two Kaisla 525 ERA boats. One had two rowers, the other two rowers and a steersman. An accomplishment of its own merit was a wooden boat built at 10 at night with two rowers. 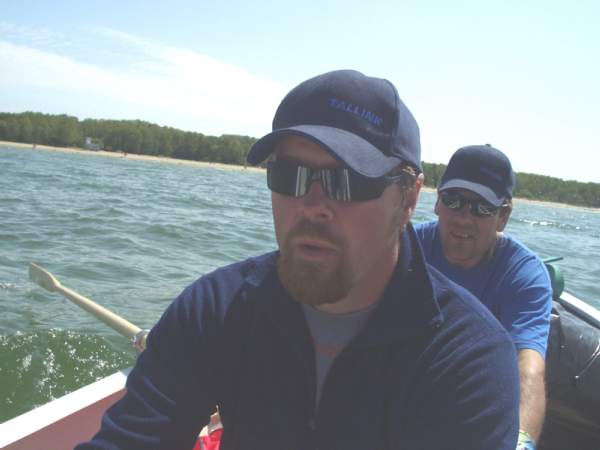 Kiili boat 440 rowers Hannu Backman and Jukka Hietanen have participated in bigger rowing competitions as well.
Hannu has also received a medal in Sulkava Soutu. The line of rowers extended very long. Hannu and Jukka (on the photograph) whiled away the time sleeping at sea and waiting for others to follow. 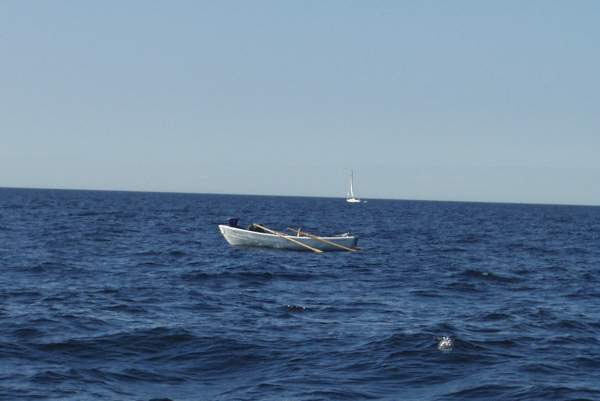 The traffic on the shipping lane was quite sparse, but on the other hand, waves from the west were increasing and soon the wind speed rose up to 10 m/s on the sea surface. Crosses from stern waves and wind waves from the ships made rowing difficult. Reaching beyond Naissaare’s northern peak topped the day off. The waves bent over the northern corner of the island and became even more difficult to handle. As always hardship was followed by smooth waters.
The forest on Naissaare offered cover from the wind and Hannu and Jukka landed with the Kiili boat 440 an hour and a half before the others at Naissaare harbour. 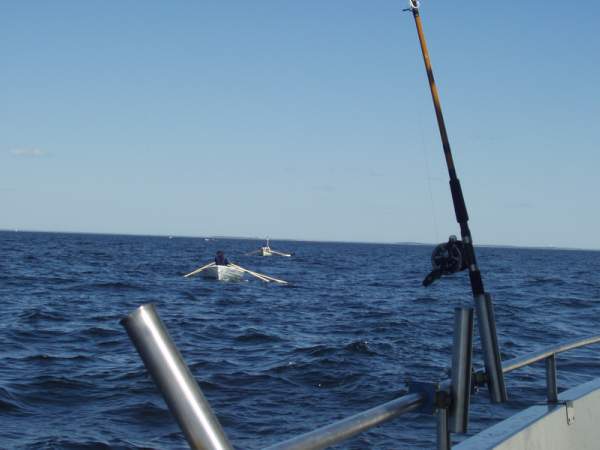 A few hundred meters from the harbour lies a pleasant camping area with a fire pit and clean sand. The weather was very warm and dry on Naissaare. An hour after setting up tents and dinner we were in bed. 10 and a half hours of pure rowing had taken its toll. At night, the wind turned north and became stronger. At sunrise, it seemed our journey had come to an end, but by the morning the wind fell to 4-5 m/s and under the cover of the island even less. 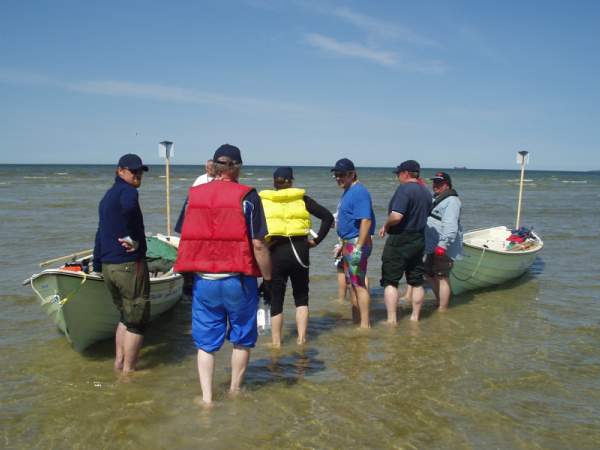 June 11, at 10 we pushed the boats into the water. After handing the unnecessary sacks, tents and sleeping bags to the safety launch, I too had to pick up oars. After two and a half hours on the rear bench of the Kiili boat 440, I was the only one to get blisters on my hands. 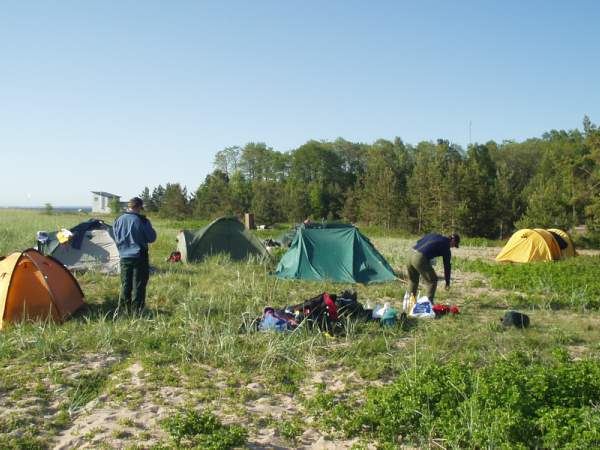 Finally at Kakumäe beach.
The route for next year is yet unclear, but the organiser of this year’s event and the one before, Heikki Haavikko, is up for suggestions and participants.
NB! Some pictures from the shipping lane to Naissaare were not made, as some ships sailed with full speed between the boats.